working together to navigate your ever changing work world 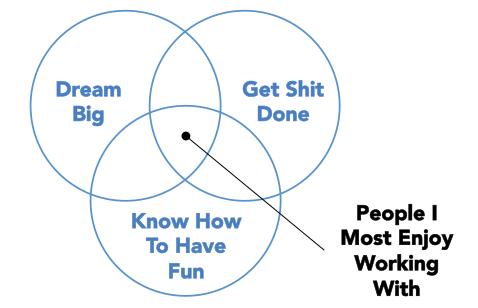 What Jeff Weiner, CEO of LinkedIn, whom I have been following as one of his first LI members since 2006!  says below is so completely true and when you yourself start thinking about the people that you and I most like and want to be around, they probably fit these very 3 characteristics.

Several weeks ago, I shared the above Venn diagram in a status update. With 20k+ likes and comments on LinkedIn and over 2.2k retweets and favorites on Twitter, it's become the most viral update I've shared to date. As a result, thought it might be interesting to provide some additional context on where the diagram came from.

It all started in a meeting where a talented team was presenting their plan for a potentially high impact initiative. Midway through, they covered the measurable results they expected to achieve in three years. Granted, they were being somewhat conservative, but their objectives were still way off what I would have expected them to be targeting based on the addressable opportunity and the assets we were bringing to the table.

Without hesitation, I challenged the team to increase their long-term goal by roughly 20x. Regardless of whether or not they could hit the target (which I think they can), the point was to get them thinking much bigger, without constraints, and to start by asking the question, "What would it take...?"

Dream Big
Oftentimes, my favorite exchanges are with people who are naturally predisposed to think at truly massive scale and without limitations. When well reasoned, that kind of vision can be highly inspirational, change the way teams solve for a specific opportunity or challenge, and ultimately, transform the trajectory of a company. During this particular meeting, I ended up writing down two simple words to capture this quality: "Dream big," with the intention of cascading the theme more broadly.

Get Sh*t Done
Almost immediately after seeing those words in writing, I realized the message was incomplete.The team leading the discussion that day may have been conservative in their approach to articulating what was possible, but they were also highly capable and credible -- and had a proven track record of delivering results. Demanding excellence is an important value for us. It's something I would never want taken for granted or crowded out by the singular objective of thinking at scale. Asking people to dream big without delivering on the vision was not only an incomplete sentiment, it could carry the unintended consequence of producing pie-in-the-sky thinking without anything to show for it.

If a goal is truly visionary, it's going to be confronted by doubters, skeptics, and those threatened by its realization. As a result, there will always be walls put up on the way to achieving the objective. Some of the most capable people I've worked with know how to go over, around, or straight through those walls by virtue of their resourcefulness and sheer force of will. In other words, they just "get sh*t done."

I added those three words to my notes, drew overlapping circles around "Get sh*t done" and "Dream big", and thought about how invaluable it is to work with people at the intersection of the two.

Know How to Have Fun

It then occurred to me that I've known a number of people who embodied the ability to dream big and get sh*t done, but who also proved very difficult to work with. Perhaps shielded by the immense value they brought to their respective organizations, they never cultivated the ability to manage compassionately, or even cared to. Rather, they did things their way and expected everyone around them to adapt accordingly. More often than not, that's exactly what people did.

While this has clearly proven to work at some now legendary companies, it's not an easily scalable or reproducible model, it's not necessary, and in my opinion, it's not fun (I say in my opinion because there are those who will argue that winning is fun, regardless of the means employed).

I've reached a point in my career where I want to be surrounded by people who not only share a vision, but a genuine commitment to upholding their company's culture and values. They are team players, don't take themselves too seriously, and "know how to have fun." And with that, I added a third circle to the Venn diagram.

At the nexus of these three circles are the people I most enjoy working with. I'm extraordinarily grateful to have the opportunity to do that every day.
Loved this quick story I read today:
A man on the floor in a factory stands, not doing any work. CEO comes up and asks his salary. The man replies - $1000.
The CEO pulls out his wallet, gives the man $1,000 and says - here's your month salary. I pay people to work here. Get out and never come back ! The man leaves. The CEO asks workers - who was this guy ?
They reply - a pizza delivery man. -- Knee-jerk is never good...
Wanted to share an article by Jane Watson that was tagged by Gordon Mackenzie, and Executive and Performance Coach

Why It’s REALLY Important That We Lose the Sloppy ‘Culture’ Thinking
I keep seeing blog posts, articles, webinars and presentations directed at HR people that use the word ‘culture’ to mean a whole variety of superficial, simple things that are not culture. These articles are often advancing the idea that culture can and should be changed to give an organization a competitive advantage, increase engagement, decrease turnover etc etc.
But this sloppy thinking about what culture is, means that prescriptions based upon that thinking are at best half-baked, and sometimes total nonsense (sorry, but I don’t think that’s an exaggeration). If HR is going to claim (or be handed) yet another mantle, that of ‘Organizational Culture expert’, then we need to do much, much better at defining what culture is, what it is not, and to think critically about why, if and how organizational culture change efforts should be undertaken.

This is a handful of the sloppiest ideas that are floating around out there like bad viruses. Avoid the sloppy!

1.   Culture Must be Homogeneous Across the Organization
I’ve read stuff that takes as its underlying premise that an organization’s culture needs to be uniform across the entire workforce in order for leaders to effectively change, harness and use culture as an advantage.

Warning: If you are employed in a place where the culture is uniform across the entire workforce, I regret to inform you that you are not part of an organization, you are a part of a cult. Don’t drink that glass of Kool-aid! Don’t marry Tom Cruise! Just pack your bag and get out now. And then repeat after me: culture is not uniform, it is not monolithic, because organizations are made up of human beings, not robots.

Nor should you want your organization’s culture to be uniform:
“We’re an innovative technology company with a culture that rewards entrepreneurial risk-takers. Our whole finance team really embraces the culture- three of them went to jail last week!”
Internal inconsistencies and subcultures exist within any culture- and usually that’s okay. The sub-culture in a department or team encourages identification amongst members of that team, it can bind groups together, and it’s often adaptive for that particular group, given the demands and constraints of their specialized function.

2.   Having a Team Building or Social Event is a Great way to Change Culture
Oh boy, where to start with this one….
​
Warning: Sending your employees on a team-building social event will not change your culture any more than sending the Amish to a movie will change theirs. Social events can (theoretically anyway) impact morale and team dynamics, but that is not the same thing as culture! Culture is not so superficial that a couple of events can create any kind of lasting, strategic change.
And frankly, if your CEO thinks it’s a good idea to spend a bunch of cash on social events as a strategy to produce the vaguely defined outcome of ‘culture change’ , you have bigger problems than your organizational culture…

3.   HR Can Change an Organization’s Culture
I wish this one were true, but it is definitely not. Just like employee engagement, retention and a host of other initiatives that (for better or worse) get handed to HR, we cannot hope to implement culture change alone. Because culture is enacted, dynamic and crowd-sourced, culture change should be thought of less like surgery, and more like conducting an orchestra, where the players are creating something together. You can’t just unilaterally change culture; you need your ‘players’ to willingly start playing a new tune.
One of my fav things to have read this week was this Top 100 List of Companies great HR from Hunt Scanlon Media.  Want to get on the list next time.  Contact us and we'll get ya on your way, with the great feedback your employees will provide to them about working at your company!  Parts of this article were removed, let's be honest, its long, but really good.  For the full article, go to this link: http://huntscanlon.com/100-companies-excel-hr/.

100 Companies That Excel In HR
Workforce magazine’s annual ranking of businesses that excel in human resources is out. Usual suspects like Google and Facebook continue to set the standard for excellence, but there were some surprises as well. Let’s go inside the just-released list and discover what it takes to make the grade.June 23, 2017 – How best to gauge the effectiveness of a human resources department? For the last four years, Workforce magazine has issued its rankings of the “world’s top companies for HR.”  This year, like last, in its list of 100 companies, the publication rated Google at No. 1, followed, in order, by Facebook, Coca-Cola, Deloitte and AT&T. Twenty-eight companies have made the list all four years.

Twenty-five firms – Ultimate Software, West Monroe Partners and LaSalle Network, to name a few – joined them in this year’s rankings for the first time.  But how did the magazine arrive at such conclusions? What makes for excellence in human resources? Joined by the staff of its research arm, Workforce’s editors settled on seven main areas: workplace culture, employee benefits, diversity and inclusion, employee development-talent management, HR innovation, leadership development and talent acquisition.

“To realize the importance of these categories and take action to improve them pushes a company from good to great,” said the magazine.
To create the rankings, Workforce researchers developed a statistical formula to analyze publicly available data on HR performance and cull what they consider the best companies, the magazine said. The research team then used what workers at the businesses had to say, provided by Glassdoor Inc., the job review website, and stirred that into the mix.